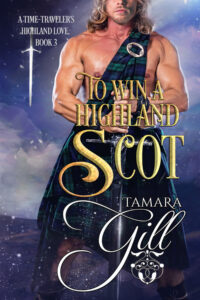 Boyd Macleod, Chief of the Macleod clan, stood before his stronghold, staring down the Fae who threatened him and those he loved. “You will not take her!” he roared, fear and panic, threatening him to lose his control. The Fae queen smirked in return to his outburst.

His wife stood behind him. He could not see her, but he knew she would be as defiant as he, standing tall and proud, a sword in her hand and ready to die this day if it meant that they would be separated.

He would not let them take her. Never.

The Fae queen gestured to Sorcha. “Mayhap, I have not been clear enough, Chief Macleod. Sorcha’s mother, a Fae Princess, was granted the child’s life in return that she would be returned to us on her five and twentieth year. She is half-Fae, after all, and does not belong in your dirty, ancient world.” The Fae Queen cast a scathing look about his land, disdain on her face as she gazed up to the castle itself, the curtain wall protecting his four-story tower castle that his father finished building late last century. It was one of the best fortresses in Scotland, and she dared to mock it. Ridicule him and his people.

“I dinna care what deal ye had. Sorcha dinna belong to ye. She belongs here with me. With our people.”

“No, she does not,” the Queen said, her tone bored. “No matter what iron you wield toward me, it will make no difference here. I could strike you down with a flick of my hand and take her anyway, take you and your men’s life away.” The Queen’s eyes seemed to glow, and for a moment, Boyd thought she may do what she threatens before seemingly thinking otherwise.

“If I do not take Sorcha, she will die here this day. I always collect on what is due to my kind, but I shall gift you something in return, Chief Macleod.”

“I dinna want anything from ye. No more deals will be made here. Not today or ever.”

The Queen smiled. She was a beautiful woman, her hair white and long flowing that sparkled as if the precious metal of silver was threaded into her locks. Her eyes were fiercely blue, as ancient as his land, and all-knowing. A powerful being that, although standing in long white robes that appeared as soft as silk, he knew the being standing within its worldly appearance was as cold as ice and her soul as hard as rock.

“Boyd,” Sorcha whispered behind him, clutching his arm and showing the first signs that she was scared. Hell, he was afraid, not that he’d ever admit to such a fault, but he was. Sorcha was everything to him. He could not lose her.

Tears welled in her eyes, and she cast a glance in the Queen’s direction. “I dinna want to go. I’m not a Fae. The tales are untrue,” his wife declared, her voice breaking on her last words.

Boyd pulled her against him, stroking her long white locks, so similar to the Fae before them, and he knew that statement to be a lie. She had come to him as a servant in his house, small-boned and striking features, otherwordly, and he had been captured by her beauty. He had fallen in love with her the moment he’d seen her. His only regret in their marriage was the absence of a bairn. No matter how much they had tried.

Keeping hold of Sorcha, he unsheathed his sword, holding it at his side. His men, armed behind him, did the same, and the sound of metal sliding against metal rent the air. A fog descended over the land, and a biting wind accompanied it. An ominous sight, and he could feel his men’s alarm, their fear of the change of the elements.

“Do not disappoint me, Macleod. A deal is a deal. If you do not obey my decree, Sorcha will be no more. If she does not come with us now, she will die. The choice is yours.”

There was no choice in such a decree. His mind roared with alarm, with hate and anger. How dare the Fae Queen do this to him and his people. If she chose, she could leave Sorcha alone, let her live out her life here with him. He knew the Fae to be fickle, untrustworthy, and cruel when they wanted to be, but this. This was beyond evil. There were no words for such an act.

“Sorcha is mortal. To take her makes no sense. Leave her be. Mayhap we can exchange something else, coin or land.”

The Queen laughed, the sound echoing through the land, mocking his words. “I have no need for your riches, Chief Macleod. The child is to be returned to us. Her mother has paid for her crimes of siring a child with a mortal. Now that child is grown and can return to the people, she should always have known.”

“This is my family. I dinna want anything to do with the Fae,” Sorcha yelled out over the wind.

But it was no use. No matter what they pleaded or offered, nothing but Sorcha would satisfy them. They would take his wife and his life along with it. For to live without her was equivalent to death itself.

The Queen raised her hand, sweeping it over his armed men. The sound of clanging metal, of bodies falling onto the other, met his ears, and Boyd turned to see his men still as death.

“Do not be alarmed. They are not dead, merely sleeping. Once Sorcha is with us, they will wake.” The Queen held out her hand toward Sorcha, her confidence that his wife would go with them spiking a fury inside of Boyd that he had held dormant.

He charged forward, raising his sword. The Queen’s eyes flared as he came within striking distance, but then he was floating, above his lands, his ability to move stripped from him.

The Queen’s face morphed into something angry and displeased. She no longer radiated light and clam, but darkness, her gown changing to black instead of white, the silks swirling like an angry sea.

“That was uncalled for, Macleod, and I cannot stand for such insolence. Come,” she reached for Sorcha. His wife fought the command, turned, and tried to hold onto the men laying at her feet, but like an unknown force, she was pulled toward the Queen.

Panic tore through Boyd, and he struggled in his invisible chains, the movement like swimming through a fast-moving current, heavy and impossible to gain traction. “Stop, please, dinna take her.” He would beg if he had to. This was his wife, his love. He could not have her stolen from him.

“Say your goodbyes. You will not see her again.” The Queen took Sorcha’s hand, and with horror, Boyd watched as his wife seemed to lose all her fear, anger, and panic. Her face relaxed to the beautiful curves that he knew so well, that he had traced with his fingers, had kissed when they made love. Her woolen gown made of the clan’s red, blue, and green colors fell from her body and was replaced by a long white, flowing robe, barely appropriate to retain honor.

“Sorcha will be happier with us, Macleod, but we thank you for your care toward our Princess.”

Sorcha looked up at him, a small frown between her brow. “I love ye, Boyd,” her whispered words carried off into the wind.

“No,” he roared, “dinna take her. No!” Boyd fought against his bonds, but it was no use. He was captured, held above the ground, and as useless as the Campbells.

The Fae and Sorcha disappeared, all but one. The Fae Queen remained, stared up at him, a smirk marring her lips. “She will be happy with us and live forever, but you’ll never see her again. But do not despair, Macleod, for I have a gift for you too.”

“I dinna want ye fucking gift, bitch,” he seethed, imaging a hundred different ways he’d like to lob off her pretty head.

“Had you cooperated, I would not need to give you anything, but now I must. I gift you,” she said, her eyes glowing alarmingly bright once again, “the gift of life. You shall live as long as the Fae, until you find true love once more.”

“I shall never love again, wench,” he stated, enjoying his ability to insult her. She could not hurt him any more than she had already done, and he wanted to hurt her. Wanted to kill her.

The Queen shrugged one delicate shoulder. “Well then, I suppose you shall live forever. Open your heart, Macleod, and your pain will be over. Fight me on this, and you shall forever dwell in your darkness, your anguish and resentment.” And then she was gone.

He dropped like a stone to the ground, his body making an oomph sound when his gut landed against a rock. He stared at where he’d seen Sorcha last, the sound of his men gaining their wits behind him.

Boyd stood, turned to face his men, despair swamping him. He’d lost the only woman that he had ever loved. His life. He raised his eyes and found his men, some still on the ground, staring at him as if they’d seen a ghoul.

Boyd grabbed his hair to look at it. Gone was his dark red hair, and in its place was the coloring of the Fae. He could not speak, did not know what the change meant, if anything.

The sound of laughter floated through the trees, and he turned, glaring at the woods, knowing the Fae Queen was watching, enjoying her foolery.

“Laugh all ye like, but know that one day I shall have my revenge on ye. I promise on my own heart’s blood,” he yelled, slicing across his hand with his sword. Blood pooled in his palm and slid down his arm. He fisted his hand, raising it to the sky. “I will not die until I see your head upon the ground. See who is laughing then.”

The laughter stopped, and he turned, striding back to Castle Druiminn, past his startled men’s faces and his staff that went about their chores.

Today, he may have lost everything, but tomorrow was a new dawn. A new day to plan, plot, and ultimately act. He would get Sorcha back, and he would kill the Faery Queen, and he would not die until he had done so.