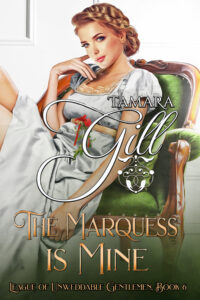 Young women of a particular age were wont to become romantic. It was no different for Lady Sarah Farley, youngest child of the late Duke of St. Albans, at the impressionable age of fourteen. With those words uttered to her eldest brother, Henry, by her younger brother’s best friend, it was the exact moment that she fell in love with the boy.

Henry stepped back from trying to take Sarah’s self-portrait she was finishing. A sketch her father had started and one of the last things he had done with her before he passed the previous year. “This is my house, Gordan, and I can do whatever I want. I’m the duke. You’re nothing but a child who should know when to speak to his betters.”

Her hero scoffed, pulling Sarah to stand behind him. “I’ll try to remember my manners the next time I’m before one.”

Sarah looked between Lord Gordan and Henry and didn’t miss the hatred they felt. It was so palatable that she could almost taste it. Lord Gordan, Giles to his friends, was two years younger than her elder brother, the duke, and already at nose level. Her brother’s eyes were narrow and unkind, Giles was the opposite, wide and clear and filled with a compassionate light.

Her favorite brother, Hugh, had invited Giles to spend the summer with them, and he had arrived only yesterday. Sarah could not remember having been more excited about having house guests. With her father’s passing, they had been in mourning a year, but this summer, her mama had allowed Hugh to invite his school friend. The moment she had spied the devilishly handsome gentleman alighting from his carriage from the attic window, her heart had moved.

For a boy of eighteen years, the same as Hugh, he moved with grace and ability. He was tall but did not look awkward in his frame. Oh no, already his shoulders were wide, strong, and gave a hint to a rakehell in the making.

Every gentleman Sarah thought handsome was destined to turn into a rake. She sighed, glancing down at his hand that remained on her wrist, holding her away from Henry. Such lovely, strong hands too. Perfectly shaped for holding one against one’s heart.

In only a few short years, she would be off to London, to have her first Season, and then men like Lord Gordan would court her, flirt, and wish to marry her. As a duke’s daughter, she would have ample to choose from. Not that she needed to accept any who bowed before her, for her heart had been moved by Giles and would forever belong to him.

“Are you unharmed?” he asked, leaning down to be closer to her shorter height. Henry told her a duke’s daughter did not need a self-portrait. That as duke’s daughter, they could hire a painter for such menial work. No sister to a duke should be sketching so.

Henry was a fool.

Sarah was well aware of what was expected of her in society when her time came to enter it. Until then, she would not allow him to take the things that meant more to her than life itself. The drawing her father started being one. Her father would never have allowed Henry to treat her with such disrespect, and neither would Hugh, who stood behind her, glaring at their elder sibling.

“Leave her alone, Henry, or I’ll bloody your nose like I did last week.”

Henry sneered at the three of them. “I’ll cut you off, you two, you’ll be left with nothing if you do not do as I say. Now get outside and play like children if that is how you’re going to behave, with your stupid sketches and silly school friends who come to stay.”

“Gladly,” Hugh said, gesturing for Sarah and Giles to join him. “Come on, we’ll do as the duke says. Let him have his lofty ideals and solitude, we can have better fun outdoors anyway.”

Sarah followed, but not before Henry took one last swipe for her drawing. This time he clutched it, and laughing, ran over to the roaring fire, and threw it onto the flames. Sarah screamed, reaching for the parchment, but Giles grabbed her, hoisting her back from the flames that wrapped about the image and consumed it.

“Sarah, no, you’ll hurt yourself.”

A sob wrenched up from somewhere deep inside, and she lent a scream. Tears streamed down her cheeks as her sketch darkened and burned before her eyes.

“You bastard.” The sound of a fist hitting flesh rent the air, and Sarah turned to see Henry’s legs go flying over the settee, his own cries of pain muffling the sound of her sobs. “How could you do that to Sarah?”

Henry stood, his footing a little unsteady as he pinched his bloody nose, trying to stem the bleeding. “Easily, she’s a baby and needs to grow up, and mark my words, Hugh, should you hit me again it’ll be the last time.”

“Touch anything of Sarah’s again or her, and it’ll be your last day on earth,” Hugh said, pulling her into his arms and helping her from the room. Sarah sobbed against her brother’s chest, and no matter how they tried to make her happy, distract her with ideas of finishing the fort her father had started to build last year, fishing or swimming, she would not be moved.

Today she needed time to mourn her loss. Her father’s drawing. Their drawing. “I think I shall go upstairs to my room. I do not feel like going outdoors just now.”

Her brother and Giles walked her to her door and waited as she stepped into her suite, her sanctuary. Hugh walked off, but Giles watched her as she turned to shut and lock the world away.

She shrugged, wiping away more tears as they fell. “Henry has always been a selfish beast. Today he merely proved it before someone outside our family.”

Giles reached out, lifting her chin to meet her eye. His thumb slid across her cheek, wiping away the tears that fell unheeded. She hiccupped, the lump in her throat hard to swallow past.

His dark, stormy eyes were filled with concern, and she reached up, touching his hand. “I will be well again, my lord.”

Lord Gordan did not look convinced, and yet at her brother’s command to join him, he reluctantly stepped back. “When you’re ready, join us outdoors. Although the summer has not started off well for you, Hugh and I will make it fun and one to remember.”

She nodded, not quite convinced that would be the case, but willing to try. “Of course.” She rallied a smile, wanting him to believe she was well again, even if her heart ached for her loss.

“While I’m here, His Grace will not touch you or anything you own.”

Her heart gave a decided flip at his words. Hugh’s friend was not only handsome, but he was also honorable. He strode off down the hall, and she watched him go, bedazzled a little by his sweetness.

Sarah could not wait to have her first Season. What a pity she had four more years to wait. The thought discouraged her all over again.