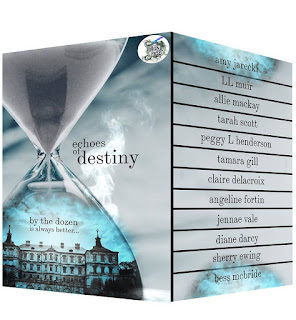 RISE OF A LEGEND
Amy Jarecki
Historical journalist, Eva MacKay, is hurled into the violence of 13th century Scotland—straight into the arms of the greatest legend Scotland has ever known…William Wallace.
NOT WITHOUT JULIET
L.L. Muir
15th Century Scotland is a long way to go for justice…
A hit man, the FBI, a long-lost sister, and handsome Highlanders hunt Juliet Bell through time. But she won’t return until she gets what’s hers. And her hunters won’t return without Juliet.
SOME LIKE IT KILTED
Allie Mackay
Mindy Menlove must return a medieval castle stone by stone to Scotland, where she’s confronted by the builder, Bran of Barra. The legendary Highland chief is maddeningly irresistible and seven hundred years young. They aren’t ready for the passion that flares between them, or the ancient secrets that will rip them apart.
SEDUCED
Tarah Scott
It’s a Mississippi Deputy Sheriff’s duty to bring a serial killer to justice…even when he’s a three-hundred-year-old Scottish lord. It’s an SAS agent’s duty to save her.
YELLOWSTONE: HEARTSONG
Peggy L. Henderson
Aimee Donovan travels back to the time of mountain men. When she falls for the beauty of rustic Yellowstone and handsome trapper Daniel Osborne, she must make an impossible decision.
DEFIANT SURRENDER
Tamara Gill
Maddie St. Clair hides from love in an antique shop. Then a medieval ring sends her to 1102 and into the life of Lady Madeline Vincent, heiress and future wife of autocratic Baron, William Dowell. By king’s decree, William weds his dead enemy’s daughter. William hides his growing respect for Madeline. Yet when her life is threatened, his loyalty is tested by the desire that flares between them—and the love that could last an eternity. If fate allows…
THE LAST HIGHLANDER
Claire Delacroix
Morgan’s research trip to Scotland turns romantic when a handsome 13th century Highlander insists that only she can send him home, and vows to win her favor. Morgan finds herself torn between helping Alasdair and wanting to keep him forever.
A TIME AND PLACE FOR EVERY LAIRD
Angeline Fortin
Claire Manning can’t imagine why she helped the escapee from her company’s lab. Then she glimpses the desperation in the eighteenth-century Highlander’s eyes and is prepared to do anything to help him. But she isn’t prepared for the handsome Scot under the layers of caked grime and blood. On the run, Claire and Hugh hide from their pursuers, but they can’t hide from desire.
SEPARATED BY TIME
Jennae Vale
Fledging witch, Maggie MacKinnon, is tested when she is sent back to 16th century Scotland to face herself as an evil witch. She risks her burgeoning relationship with Dylan Sinclair, her future as a witch, and the very existence of the bridge through time.
SHE OWNS THE KNIGHT
Diane Darcy
Gillian Corbett finally finds the knight of her dreams…in the past. But he’s bossy, overbearing, and…betrothed!
Why can’t he find a lady who is obedient…or at least not trying to kill him? Sir Kellen Marshall needs an heir, an alliance, and a chaste bride. What he got is a demanding female who drives him daft. Why, then, does he want to lay the world at her feet?
FOR ALL OF EVER
Sherry Ewing
Katherine Wakefield dreamed of her knight all her life. How could she know she’d find him in the past?
Nothing prepares Riorden de Deveraux for the beautiful ghost in his chamber.
Will the past consume their future, or will Time hurdle Katherine forward where she truly belongs?
MOONLIGHT WISHES IN TIME
Bess McBride
Mattie Crockwell spends her nights with the man of her dreams, Lord Ashton, a character in her historical romance novel. One night, she wishes on a full moon for a man like Lord Ashton. William Sinclair wishes on the moon for a woman who loves him and not his fortune.