Have Yourself a Merry Little Secret

From the seductive boudoirs and elite salons of London to the ancient castles of the snowy Scottish Highlands, our fearless heroines enter the Christmas season in pursuit of their heart’s desire. But, the course of true love never did run smooth… especially when SECRETS abound. Tales of intrigue, romantic adventure, sizzling passion, and heartwarming holiday romance. Unwrap the pleasure… 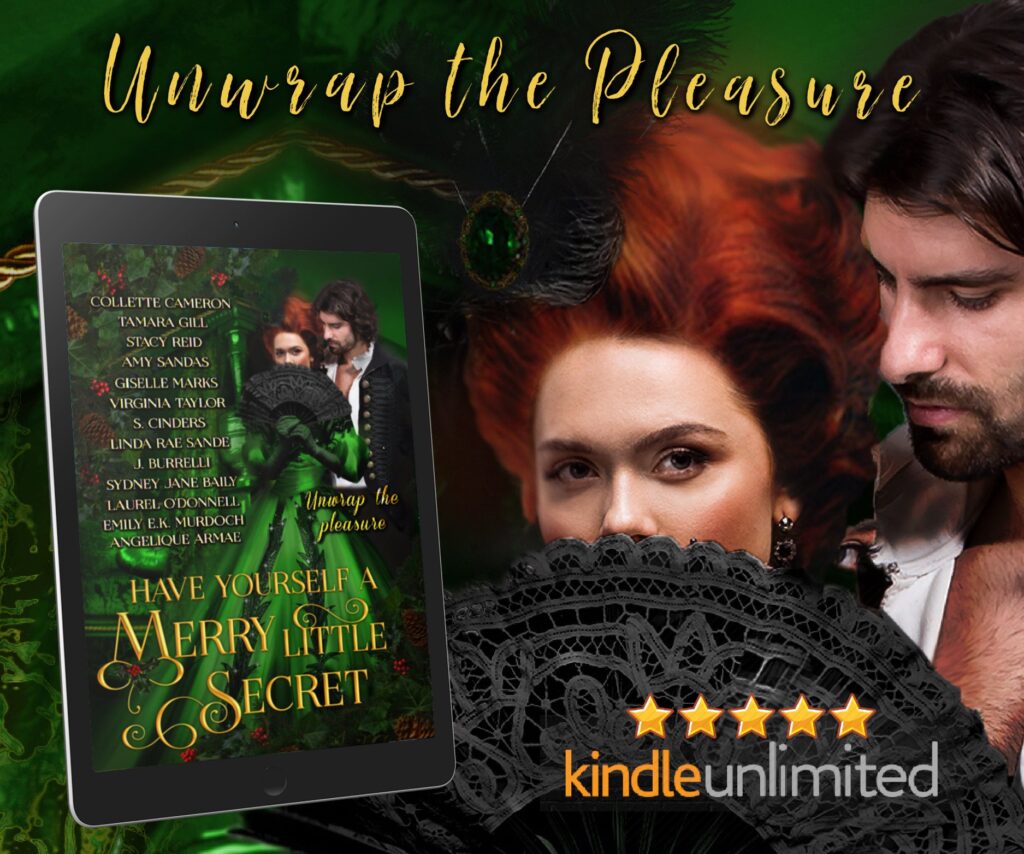 Wedding Her Christmas Duke – by Collette Cameron
He’s not who he says he is…but then again, neither is she. Their secrets are revealed at a Christmastide house party, resulting in scandal and scorching romance.

The Knot of a Knight – by Linda Rae Sande
Sir Randolph’s daytime occupation collides with his nocturnal avocation of service to the Crown when he discovers Lady X’s hidden stash of bank notes. They might be counterfeit—but are his feelings for her?

The Marquess is Mine – by Tamara Gill
Is a Christmas ball at St. Albans Abbey the perfect setting for Sarah to regain her trust in love–and in Giles? Or is their second chance at happily ever after doomed to end as badly as their first?

A Yuletide Miracle – by Laurel O’Donnell
The one knight who didn’t believe her was the only man who could keep her secret and save the Yule.

The Lady Who Stole Christmas – by Sydney Jane Baily
Amid mistletoe and missing jewels, a wealthy widow and a sexy sleuth play a game of cat and mouse.

Christmas with a Czar – by Emily E.K. Murdoch
This Christmas at St. James’ Court, a gentleman claiming to be a Czar is not all that he seems…

A Scot Most Wanted – by Angelique Armae
When highwaywoman Catrina Lennox’s secret is unmasked during a Christmas Eve snowstorm, she learns just how deliciously scandalous the laird she once walked out on, truly is.

Secretly Marvellous – by Virginia Taylor
Lady Mary doesn’t expect Lord Westerham to ask for her hand in marriage but she has a secret reason to say ‘yes’ and mean ‘no.’

Yuletide Secrets – by S. Cinders
He promised to never love again—until she quite literally fell at his feet. Now he’s ruined for anyone else but her.

One Scandalous Christmas – by J. Burrelli
Robert Vaughn, never expected to lay eyes on Kitty Thorpe again. Her misplaced anger confounds him, but the fire in her eyes tempts him to pure folly, of falling in love with her all over again.

The Rogue’s Secret – by Stacy Reid and Giselle Marks
Bachelor, Lord Rupert Rogers, is searching for the treasure his great uncle suggests he has left him but finds an enemy and a bride he must convince with one kiss at a time they are perfect for each other…

The Secrets He Keeps – by Amy Sandas
She’s the madam of an elite London brothel. He’s a master in the art of seduction. Enticing her to his bed will be a pleasure. Convincing her love is real might prove to be impossible.

Have Yourself a Merry Little Scandal 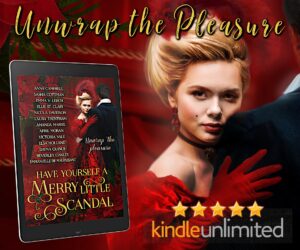 From the snowbound Scottish Highlands to the glittering ballrooms of London, our fearless heroines enter the Christmas season in pursuit of their heart’s desire. But, the course of true love never did run smooth… especially when SCANDAL is afoot. Tales of romantic adventure, sizzling passion, and heartwarming holiday romance. Unwrap the pleasure…

There is also TWO great giveaways happening right now. Details on how to win Amazon Gift Cards below! Good luck!! 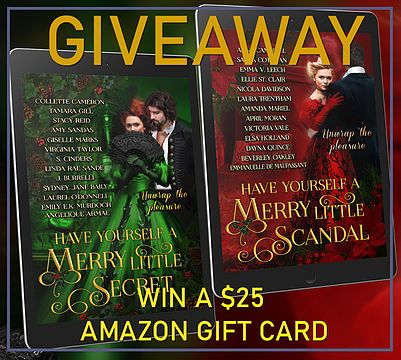