Hi everyone! I’m super excited to share with you all the release of book 5 in my Kiss the Wallflower series, A DUKE’S WILD KISS!! Miss Olivia Quinton has been set aside by a gentleman admirer. To make matters worse, he’s now after her friend. Olivia sets out to use his best friend, Duke Hamlyn to help her seek revenge. Of course, the Duke is shockingly attractive as his kisses are wild, and Olivia comes to realize that maybe the Duke is the gentleman for her and no one else will do. 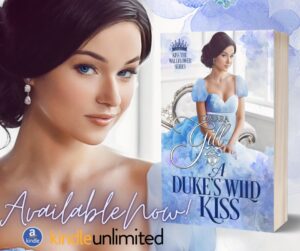 Miss Olivia Quinton is certain a marriage proposal is imminent, but her hopes are dashed when her gentleman admirer moves his attentions to another at a country house party. Disappointed by these turns of events and seeing the man for the fiend he is, Olivia hatches a plan of revenge. With the aid of Duke Hamlyn, she sets out to make her past love interest pay for his betrayal.

Jasper Abraham, Duke Hamlyn, did not think his Season would be taken up with helping a bedeviling chit in gaining her revenge. Everything would work out splendidly well if he hadn’t already agreed to help his friend keep Olivia away from him during the house party and remaining Season.

Thrown together with opposite goals, Jasper cannot help but wonder why anyone would overthrow the delectable, sweet Olivia Quinton. Playing her fake beau is no chore, and the more time he spends with her, the more he wants to do a lot more than flirt with the chit.

Unfortunately, when games are played, there can be only one winner, but perhaps in this folly, everyone will lose.

As an added bonus, my October release, TO DREAM OF YOU is on sale for 99c!! Grab your copy today before this sale ends.

After months spent in hiding, Princess Holly is finally ready to take her rightful place as ruler of Atharia. All she has to do now is survive her murderous uncle’s attempts to steal the throne for himself. But when a mysterious gentleman washes up on the shores of her beach, she’s shocked to realize she needs his help almost as much as he needs hers …

When Drew Meyers left his estate, his plan was to escape the arranged marriage, his scheming father brokered for him. The storm that nearly killed him was not part of the plan. Neither was meeting her. Holly is everything he ever wanted, and he will do anything to keep her safe and get her home—even if doing so means he’ll be forced to let her go forever…

A union between a princess and a lowly future duke is forbidden. But as intrigue abounds and their enemies circle, will Drew and Holly defy the obligations and expectations that stand between them to take a chance on love? Or is their happily ever after merely a dream?